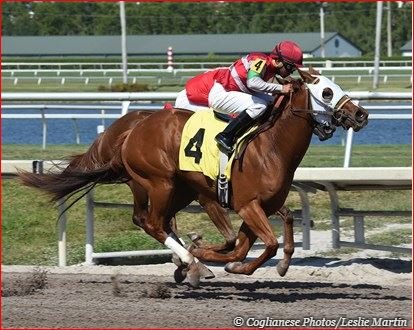 Monarch Stables’ Bye Bye J kicked away late to score on debut April 26 at Gulfstream Park and gave freshman sire Uncaptured his first winner from his first starter. Trained by Ronald Spatz, Bye Bye J went off as the 8-5 favorite in the field of seven 2-year-old fillies going 4 1/2 furlongs. The chestnut filly settled into second behind Nancysaidso and rated well behind fractions of :21.90 and :45.79 for the first half-mile. Off the turn, jockey Miguel Vasquez switched to left-handed urging and Bye Bye J responded well, closed late, and won by three-quarters of a length. She stopped the clock in :52.44 over a fast track.