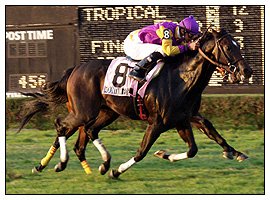 Last year, she won the Judysredshoes Stakes in September, she was 4th in the $200,000 Elmer Heubeck Distaff on Florida Million Day in November (beaten less than 2 lengths for it all), she won the Express Star Stakes on December 9th, and she followed that with a third place finish in the Stage Door Betty Handicap on December 28th.

She has since retired and is a successful brood mare.