Bird Wildcat wins with Louis Saez after a troubled trip.

Tapeta Track no problem for Marisa!

Trainer Ron Spatz admits he didn’t know how Monarch Stables Inc’s 2-year-old filly Last Leaf would handle the turf in Saturday’s $75,000 Hollywood Beach Stakes at Gulfstream Park in Hallandale Beach, Fla. “My legs are tired. I’ve been doing a rain dance for three days,” said Spatz, whose filly won twice on the main track before facing colts and geldings in the Hollywood Beach. “They tell me top and bottom is good for [turf], but she has small feet so I really didn’t know.”
Continue Reading ->

Light Fury  comes through first time Tapeta and turned the tables on Vow me Now. 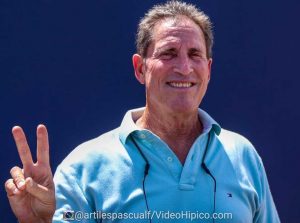 When Ron Spatz found his first job at the racetrack, he was not in search of a career. Spatz was a typical 20-year-old on break from college, looking to make a little money and enjoy the Jersey Shore. Growing up in Union City, he’d always liked animals. “I’d bring home every pet I could find – dogs, cats, turtles, frogs,” he said. But he never expected the highlight of that summer vacation to be working with the horses.

“Something happened that summer,” he recalled. “Being around the horses, they just drew me in. I went back to school for a few months, but I knew that was not where I wanted to be. The racetrack, that was it for me. I’d found my niche.”

He left Monmouth College and an unfinished degree in business administration behind, and never looked back.

Spatz celebrates five decades in racing this year, the last four as a trainer in South Florida. He has spent the last five years dedicating his time and energy to the industry as a Board member of the Florida HBPA.

“I didn’t have a lot of interest in running for the Board, to be honest,” Spatz said. “I had friends who were on the Board, and there was a lot of dissension, a lot of conflict. But [then-Board member] Bill Kaplan came to me and said, ‘you’ve been in racing a long time, don’t you want to give something back?’ I thought about it, and I realized he had a point. I had more free time, so I talked myself into it.”

Last Leaf got away from the gate much better today which resulted in this good-looking 10 and three-quarter length romp.

Light Fury wins his second back-to-back and has 5 wins; 2 seconds, and 1 third in 9 turf starts!

Happy to win a race for the Federico’s. Our first one together.

Love this Filly, winner in her second start for Monarch Stables

What a great race for both horses in the seventh race today for the 1/2 punch. Wasdn’t sure who was going to win till close to the finish, very exciting!

I’ll Do It My Way another winner for Monarch Stables at Gulfstream Park.

First timer Flipping Fish gets it done for Monarch Stables 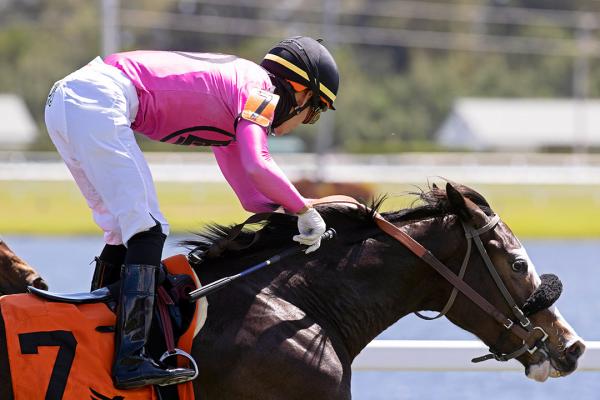 HALLANDALE BEACH, Fla. – Despite sending out I Get It to register the most important victory of her career, a half-length decision over favored World Tour in Saturday’s Sanibel Island Stakes, trainer Ron Spatz had to say a sad good-bye to the big horse in his barn earlier this week. I Get It joined trainer Mark Casse’s stable, having been purchased privately by owner Gary Barber following her troubled fourth-place finish (placed third by disqualification) four weeks earlier in the Grade 3 Herecomesthebride.

I Get It rallied from last in the Sanibel Island, a one-mile turf race for 3-year-old fillies, to register her fifth win in nine career starts. She tipped her hand that she was sitting on that type of performance with her effort in the Herecomesthebride. I Get It was seemingly full of run under Miguel Vasquez before being forced to check sharply inside Spanish Loveaffair on the far turn of the Herecomesthebride, losing all chance.

Spatz said he understands why I Get It has to move on. Read More ->

Very proud of I Get It winning her first stake race today from last to first for her new owner Gary Barber, she’s off to Keeneland for her next start and I predict she will be a graded stakes winner before long!

Gary Barber’s I Get It, last of eight early in Gulfstream’s $100,000 Sanibel Island Stakes, rallied wide down the stretch, took the lead a furlong from home and held off a late run by fellow OBS graduate World Tour (April ’20) to beat her by half a length. It’s the first stakes win for the graded stakes placed 3-year-old filly by Get Stormy, trained by Ron Spatz, no 9-5-0-1 with $156,278 in earnings. Consigned by Kaisen Sales (Richard Kent), to the 2019 OBS October Yearling Sale, she was purchased by her trainer for $8,500.

Man of Vision winning for the 2nd time in January, great start in 2021 for him

First time out winner for Best a Luck Farm,

I Get It wins her 4th race in 7 starts, We Got this Stable is very proud of her!!

Man of Vision, gettin’ it done 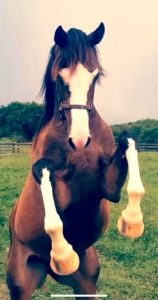