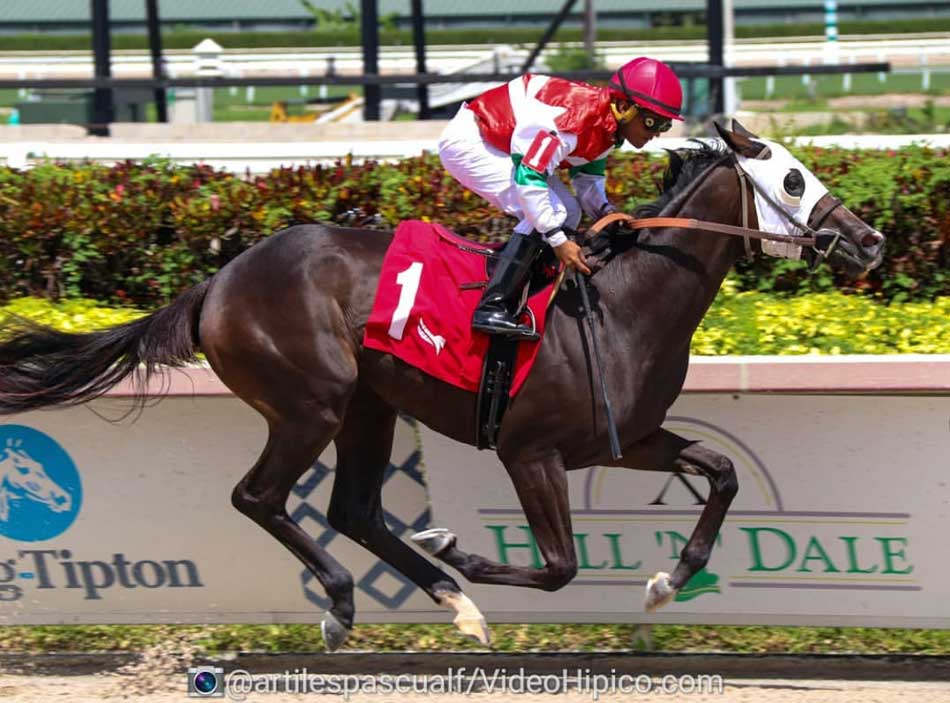 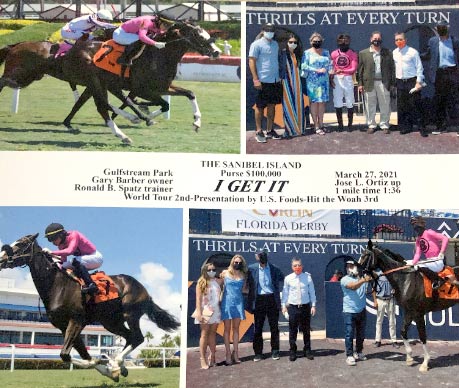 Very proud of I Get It winning her first stake race March 27th, 2021 from last to first for her new owner Gary Barber, she’s off to Keeneland for her next start and I predict she will be a graded stakes winner before long!

Art G is Back 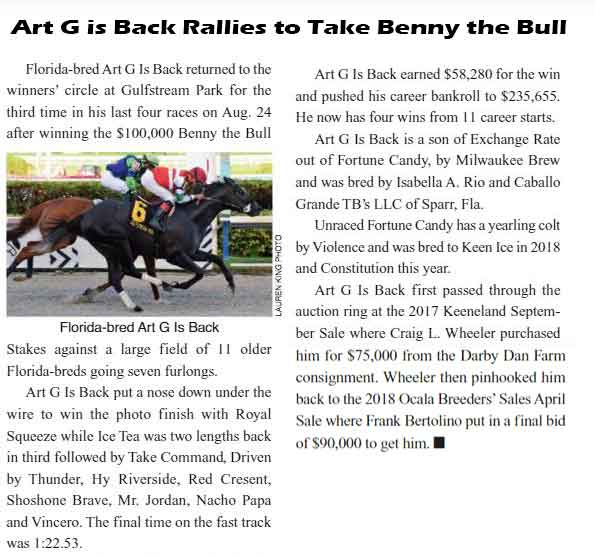 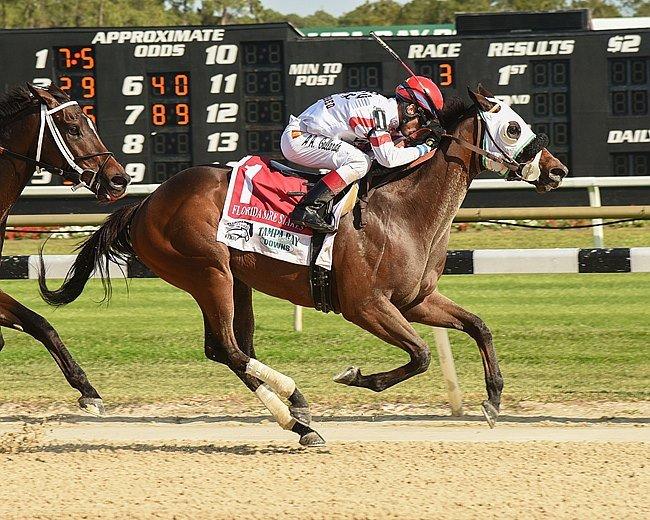 Mo Cash battled favored Three Rules in the stretch and prevailed by three-quarters of a length in the $125,000 FTBOA Marion County Florida Sire Stakes Dec. 16 at Tampa Bay Downs.
The seven-furlong stakes for 3-year-old Florida-bred colts and geldings was the second black-type win for the Adios Charlie gelding. He won the Ocala Breeders’ Sales Sophomore Stakes also at Tampa in April, ran second in the May 20 Big Drama Stakes, and was also second in the July 1 Carry Back Stakes (G3) behind Three Rules.
Know More »

Monarch Stables’ Bye Bye J kicked away late to score on debut April 26 at Gulfstream Park and gave freshman sire Uncaptured his first winner from his first starter.
Trained by Ronald Spatz, Bye Bye J went off as the 8-5 favorite in the field of seven 2-year-old fillies going 4 1/2 furlongs. The chestnut filly settled into second behind Nancysaidso and rated well behind fractions of :21.90 and :45.79 for the first half-mile. Off the turn, jockey Miguel Vasquez switched to left-handed urging and Bye Bye J responded well, closed late, and won by three-quarters of a length. She stopped the clock in :52.44 over a fast track. 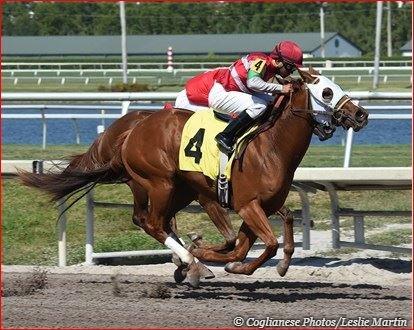 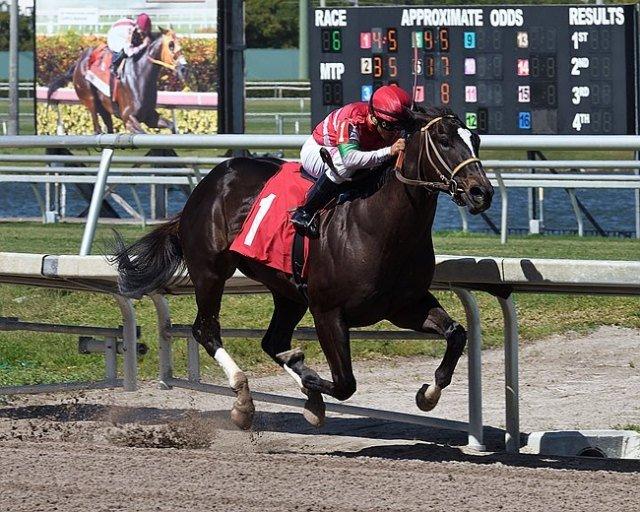 Trained by Ronald Spatz, Saint Michael posted an April 20 timed work, going four furlongs in :47.91 over the Gulfstream main track. The colt, bred by Jeannine Strauss McGinn in Florida, is out of the Saint Anddan mare Santa Lacera.
Handsome Mike, campaigned by Reddam Racing and trained by Doug O’Neill, competed in nine grade 1 races from ages 2 to 4 but was unable to get a breakthrough win. As a 3-year-old, he earned his highest achievement in the Pennsylvania Derby (G2) at Parx Racing, and at 4 he won the Commonwealth Stakes (G3) at Keeneland, when the main track had an all-weather surface.

Carterista was a familiar name to racing fans in the 1990’s, and Ron trained the hard-knocking grass specialist through the greater part of distinguished career that spanned almost a decade.  the Dr. Carter gelding always seemed to compete against the best of his division- vs. rivals such as AWAD, MECKE, THE VID and many others. He banked over $753,000 and finished with a remarkable 27 wins from 102 starts.
CARTERISTA was voted Florida-bred grass champion by the Florida Breeders Association. After he retired, a race was bnamed after him in his honor- The Carterista Handicap. 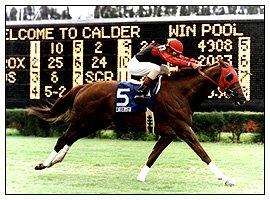 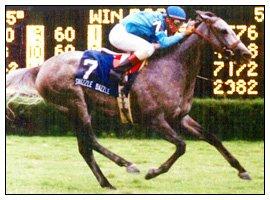 Was a real success story. Purchased for $24,226.
Snazzle Dazzle won the Chapple Belle Stakes at Louisiana Downs; the Begonia Handicap at Calder and the office Queen Breeder’s cup, also at Calder. She placed second in the Herecomesthebride Stakes at Gulfstream

Earned $129,710 in her career. She won the Office Queen Stakes at Calder, placed Second in the Sweetest Chant Stakes, and Finished third in the Patricia Stakes at Hialeah. 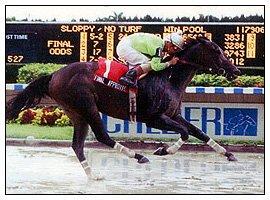 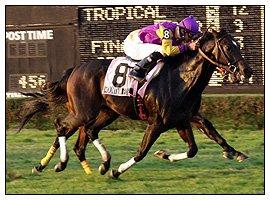 Mountain Forum emerged in the Fall of 2001 as the most promising 2 year old in Ron’s barn. The Versatile colt finished second in the 125k florida stallion stakes at 7f on the dirt, and went on to win the Fabulous Frolic Stakes at a mile on  the turf. At Gulfstream Park’s Winter meet, Mountain Forum beat some well regarded  3 year olds in an 80k optional claiming event, and followed that up in his next start by winning the 100k OBS championship by 3 lengths 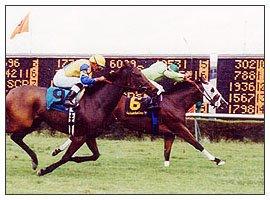 I NO BEST is shown at left (Inside towards rail) winning The Fairlee Wild Stakes at Calder on October 7, 2001

NOBLE ROBYN was a remarkable game and determined sprinter. The speedy more always seemed to finish first or second. During a prolonged stretch from March of 1889 through August of 2000 (27 stats), she was only off the board 3 times! She finished either first or second an amazing 21 of those 27 stats! NOBLE ROBYN won the Maggie’s Pistol Stakes, the Copano Handicap (Turf),  the Hibiscus (turf), and the Thirty Zip Handicap. 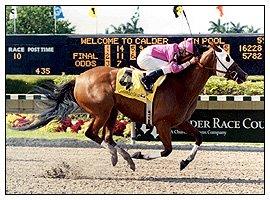 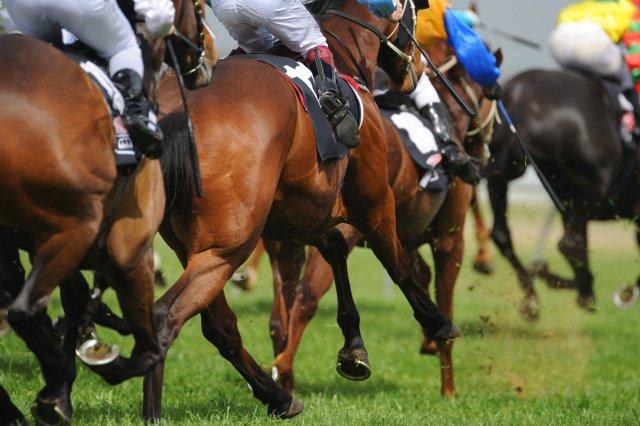 The three-time stakes winner of last season, whose most important career win came in the 7-furlong Grade 3 Chaposa Springs Handicap in her 3-year-old finale, looked good winning the Kimscountrydiamond Stakes on Aug. 3, her second start after a lengthy layoff.
On Oct. 4, 2003, CHISPISKI led every step of the way to win the $75,000 U Can Do It Handicap at Calder for the second year in a row. Her final time of 1:17.61 for the 6 1/2 furlongs was a full second faster than her winning time in the 2002 U Can Do It, when the speedy daughter of Appealing Skier dominated to win by 3 3/4-lengths. The victory pushed her career earnings over $354,000. 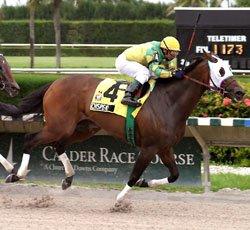 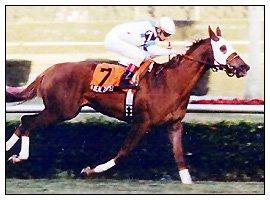 A REAL ZIPPER is shown here winning the Mac Diarmida Stakes on the turf at Gulfstream Park on January 14,1996

REDOUBLED MISS, Ron’s 4-year old filly owned by Centaur Farms, has continued to run well in top company.
Last year, she won the Judysredshoes Stakes in September, she was 4th in the $200,000 Elmer Heubeck Distaff on Florida Million Day in November (beaten less than 2 lengths for it all), she won the Express Star Stakes on December 9th, and she followed that with a third place finish in the Stage Door Betty Handicap on December 28th.
This year in 2003, REDOUBLED MISS has added to her impressive resume. She finished third in the Grade 3 Sabin Handicap at Gulfstream on Feb 8th. She finished third in the Calder Breeder’s Cup Handicap on April 26th. She was second in the Bimini Flyer Stakes in June. She was second in the $75,000 Nancy’s Glitter Handicap on July 19th. And she finished second again in the $100,000 Aspidistra Handicap on August 23. The career earnings of the homebred daughter of Adhocracy near $300,000.